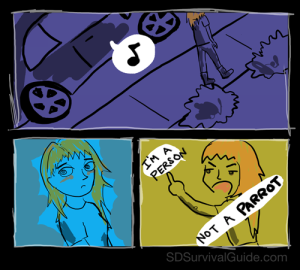 I would say for a very, very, small fraction of men, catcalling can be a misguided attempt to compliment women, and there can even be subcultures which find it more, well, complimentary. For most people, however, catcalling is just bullying. Deep down, we all know that.

Let’s go back to elementary school. Little Tommy sits at his desk near the back of the room (his seat was assigned by the teacher). Bully Bobby is rapping the back of Tommy’s chair with a pencil. Tommy feels very nervous. To be honest, he feels a little scared. He doesn’t want to tell on Bobby. But, when the teacher calls on Tommy, and he doesn’t know the answer, he can’t help but sputter, “S-sorry, Bobby was hitting the back of my chair and, and—“

“I wasn’t doing anything!” Bobby shouts, of course.

If all Bobby was doing was tapping the back of a chair, then why was Tommy scared? It’s annoying, but by itself, it’s not that big of a deal, right? The problem is that last week, Bobby also told Tommy he was going to kick him in the head at recess, and before that, he even pushed Tommy against the wall when no one could see them in the bathroom. And last year, Jack gave Tommy a black eye (Jack has since moved on to middle school).

What happens when you confront a catcaller? They nearly always say, “It’s just a compliment!”

Though Bobby understands just rapping on Tommy’s chair with a pencil “isn’t doing anything,” and neither is stepping on the back of his shoe to make it fall off, or even giving a head-rub with his knuckles, he does know actual violence will result in detention. What he’s discovered through bullying, however, is that he can get the same delightful rise out of Tommy, the same jolt of power, by riding that line of permissible taunts and insults.

Like Jack and Bobby (and other bullies), I think catcallers, too, exist on a spectrum of what they want out of their taunts. The ends of the curve really do want punch and hurt and blacken eyes. Others want to test their strength, their control, while remaining safe within the confines of social acceptance. Still, more of them have found a trick that makes them feel powerful. Maybe they’re not really sure why, but they love it.

Now, Bobby is an amateur bully and is never going to actually beat Tommy up and make him bleed, but Tommy doesn’t know that. What Bobby isn’t sophisticated enough to understand is that he’s high on the fear instilled in Tommy by others. Maybe Bobby’s dad is also a bully, or maybe Bobby just has some misguided ideas about what it means to be a ‘macho’ man, but all he really understands is that having power over Tommy makes him forget he’s really, actually, very small.

I am (of course) inspired to write this post based on a friend’s recent experience (which he said I could recount here). He tactfully confronted a man who’d been voicing his interest in nearby women he seemingly found attractive. As it was, it’s telling that this catcaller used the “scatter gun” approach to his outbursts. Real flattery is when one human being gives a special interest to another human being in a moment that says, “gee whiz, I’m noticing you.” I don’t personally even believe in the One or anything like that, but even I don’t feel particularly chuffed by the desperate broken-record that is a catcall voiced to many and for everyone to hear.

What’s most disturbing, however, is this man’s last excuse. When pressed, he said, “Why? I’m not gonna rape ’em.”

Rape? Really?? Let’s be clear, nobody brought up rape except the dude who was saying, “Mhhmm,” and “Hey girl, you fine.” He’s the one who made that connection. And that, folks, is why I know he knows he’s nothing but a bully. He knows the line he can’t cross. He knows what other people are thinking, anyway. He knows the threat he’s still managing to imply with something as “innocent” as a compliment. End of story.