Now, I don’t mean straight men and women are committing to a daily lived performance of “being gay” in the way that I survived my own closet for countless years (and sometimes re-enter in certain professional and public contexts). I’ve never met a real-life “Lisa” (of the L Word) and anytime a man has told me he’s “actually a lesbian” I know he’s not confessing that he’s trans and he’s definitely being annoying.

Instead, I see straight men and women momentarily pretending to be gay, often on Facebook. Sometimes it’s a one-time comment in the context of an argument or a joke, other times it’s as elaborate as a fake relationship, maintained for several days or even months. Lately, I’ve seen a lot of responses by my straight “allies” to the Supreme Court marriage equality decision that are more or less, “Now I need to find someone to get gay married!!” 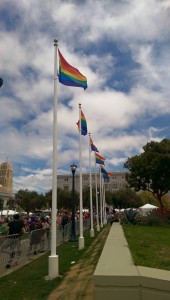 I didn’t know right away how I felt about this, but I knew something was wrong. First of all, these folks are making the distinction by calling it “gay marriage” so I’m not sure they’re imagining something significantly different than just “marriage” — maybe something with extra rainbows — but that much is immediately off-putting. So is the idea that “gay marriage” is something you just off-and do on a whim and not a right that was hard won after years of violence and oppression.

My friends and loved ones who attended SF Pride this year are reporting the sense that there were a lot more straight people in attendance than years prior. An article about this is unsettling in its flippant headline, When, Exactly, Did Pride Become A Party For Straight Teens?, despite touching on the recent and possibly related violence. That’s right, shots were fired at SF Pride.

So, I find myself wondering with increasing urgency why exactly do straight people pretend to be gay and how exactly should I respond to that?

With no initial judgement either way, I present the cases I most often see:

I can’t say definitively that it’s never appropriate to “pretend” to be gay. Sometimes it even seems to help push along the conversation. I only caution my friends who are used to making the “I need to get gay married” joke (and any similar faux-homage, or should I say homoge?) to reconsider making it in the upcoming months. There is already a dangerous and hateful backlash to the Supreme Court decision and it will probably continue to worsen. It is hurtful for anyone not affected to make light of something that is so serious for the people who are affected. Even if we don’t want to get married, there is something legitimizing about knowing we are recognized by the Supreme Court of the United States. Most of the time, I feel ready to dare anyone to defy me because I can tell them love has won.

But sometimes I feel less safe in my “acceptance,” because I see so-called-allies using this acceptance to entitle themselves. I see a guy at Brass Rail last night videotaping a female go-go dancer on his phone, and returning to videotape her even after another patron told him to stop, and resisting my efforts to also make him stop. Someone I care about sees a straight guy actually fucking ask where he could “see some boobies” at her pride parade in SF last weekend. I see straight men lurking at gay clubs for the straight women who have always tried to find a safe place to party (and have been welcome for years), straight men waiting for the end of the night when women are drunk and tired and trying to get home. I see people who earlier this month insisted calling Caitlyn Jenner “Bruce” now “celebrating” this “LGBT” victory. And then I have to see straight people on Facebook with a rainbow filter say they’re going to get “gay married.”

Forgive me if I don’t think that’s hilarious.