Before I begin… This metaphor might be too lighthearted for a serious subject matter. It is my privilege* to be able to talk “lightly” of cultural appropriation. I intend to leverage my privilege (for justice, I hope!) in this instance; I have the emotional energy to write on this subject without deep personal distress and I can offer a blog post that is easy enough to read and a might be place to get the conversation started with newbies, etc.

Still, since I’m always thinking about partying and I also “sometimes” think about important social issues, I thought to myself: Cultural Appropriation Is Like Crashing A Party…! 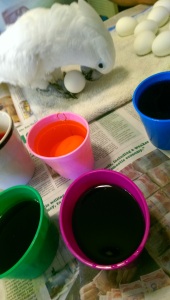 Maybe this makes sense to me because of the almost holy respect I have for crashing parties the right way. It is an honor to be a stranger at someone else’s party (and an honor I certainly don’t want to fuck up by being an asshole). Some party crashers choose the “nothing to lose” mentality and swoop on all the drinks and food with no consideration for their hosts, and to them I say, you are ungrateful and terrible. Let’s pretend we don’t want to be ungrateful and terrible, and move on to being appreciative and thoughtful…

Imagine I’ve crashed a party. My senses are heightened. I observe the local party customs. Do people freely reach into the cooler, or do they ask around before opening a beer that might not be theirs? Where are cigarettes smoked? Who’s allowed to change the music? Since I’m not invited, what extra etiquette precautions must I take to demonstrate I am willing to be a respectful and easygoing guest? 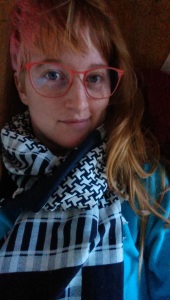 This ordinary keffiyeh is worn for comfort and fashion and (as far as I can tell) is fine to borrow, as opposed to the Palestinian keffiyeh which holds significant political meaning and should probably be researched before choosing to wear.

Sometimes party etiquette is not about what you don’t do, but how you do participate. If I’m the only one not dancing, I might be making the dancers feel vulnerable, judged. Being a respectful party crasher means trying to defer to the way others do the party thing. You must find the appropriate spot on the spectrum between hot mess and party pooper. You can’t be the only drunken disaster, because you’re stepping all over someone else’s party (and being oppressive), but you also can’t be a total wallflower in a room full of rockstars because you’re going to come across as lazy or stifling or a cop or worse.

And you know what you do when you really don’t fit in at a party you’re crashing and you might be making others uncomfortable? You leave.

Here’s where I’m reaching, but I think cultural appropriation suffers from the same inappropriate levels of participation. People will put on a war bonnet (or a “feather headdress”) because they think it looks cool, but they won’t bother to learn about the meaning of the bonnet (low participation = disrespectful). Or, in the other direction, you might be invited to partake in a customary food, but then you go too far and put on all the makeup and try to lead the sermon (overbearing participation = oppressive).

I think borrowing from other cultures primarily begs one to ask, “Am I invited?” Or, more deeply, “In what ways am I invited (or not)?”

If you choose to ignore your lack of invitation, then how far are you willing to crash? To what consequences? Now, if the cultural item is religious, to what extent am I willing to apply my personal ideology that nothing is sacred? If I’m rebelling against an institution? What if my actions hurt someone’s feelings? What if I don’t know what the fuck I’m talking about? Is it really that important to me to wear a white keffiyeh with a black fishnet pattern, or could I choose a more neutral gray one because I really have no personal connection to the Israeli-Palestinian conflict?

So, at the end of the day, I would ask my friends and others to remember that they might be culture crashers. Being actively aware that you’re crashing a party you weren’t invited to is the first step to being a better guest.

*As a white person & as a person comprised mostly of cultures that tend to do the appropriating rather than be appropriated from, I acknowledge my privilege and my lack of personal insight. My heritage is a bit Swedish, for example, of the Viking variety. Vikings pillaged and stole (and raped) so much that they are actually known for it. That’s pretty shitty, and it’s shitty that assumption tends to raise a hand to the mouth to stifle a yawn rather than red flags or even a single eyebrow.

I do subscribe to some aspects of “gay culture,” so I guess I have felt some stings of appropriation in that regard (Macklemore = pls stop). It’s an intersectional issue, for sure.

2 thoughts on “Cultural Appropriation is Like Crashing a Party?”