Ok, so one of my friends read my last post (Hooray! I have nice friends) and said,

“Sami, what in the hell is the bear arm.  You can’t just drop something like that and not explain it. Also, kicky boots?” 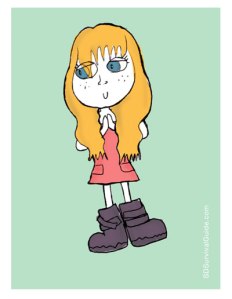 Everyone seems to think I’m adorable. That does not mean my personality has to match.

I dressed in my Spyro the Dragon costume for a party in PB, so the fireball told me I had to drink it. In fact, the fireball taunted me for not thinking of bringing my own in the first place. I mean, come on, dragons drink fireball, not Jim Beam out of a paper bag.

I spent much of the night chatting up a pretty engineer. When it became apparent I wasn’t really her type, I released some of my angst by flinging myself violently around the stripper pole in the middle of the living room (I know two people who have these. Apparently they are good for exercise. Also, dragon rage). In a dizzy combination of glee and frustration, I stomped numbly to the sliding glass door.

Outside, redditor boys with creative costumes, attractive PB women, and the usual bros had been tossing the proverbial ping pong ball across a long table into little red cups. These, and empty cans, littered the surface before me. Most of the partiers faced away from the messy cluster, save three, including myself. 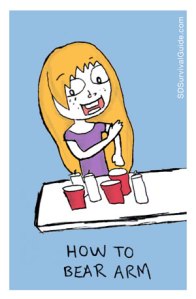 Katelyn told me later that she blamed what I was about to do on a hapless witness and I got off scott-free.

In one smooth series of motions I swiped my arm across the table, swiveled, re-entered through the glass slider, and closed the door behind me. Apparently the cans and empty cups scattered dramatically. Katelyn asked the sole other witness, “Why did you do that?” Everyone laughed at his expense.

The bear arm results from the potent combination of three things. Me, alcohol, and unrequited lust. 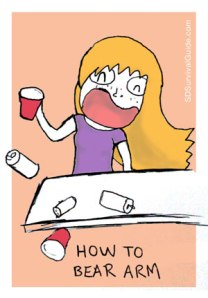 Kicky boots are more about a general taste for violence against inanimante objects, though alcohol is also involved. Unlike the bear arm, my need to apply shoe to object can come out of the innocent place of, “look, I kick things and physics happens!” But bear arm is immensely more satisfying.

“Hey stop staring! Haven’t you ever seen a dragon before?” – (me as) Spyro the Dragon

One thought on “The Right to Bear Arm”