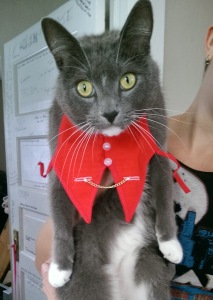 There are a lot of words in this post, so I will break them up with pictures of  my roommate’s cats.

I have the great fortune to have some influence on my social space(s). By blogging and participating in a lot of group conversations, I think I’ve tricked my friends into thinking I have a good moral compass. My primary externally-assigned adjective is migrating from “redhead” to “thoughtful.” Well, let me invite you into more of my thoughts, because I’m loving this.

This year, especially, I am deciding what to do with my influence. I’ve always liked to think of myself as an enabler, but perhaps now I’m really interested in “directed enabling.” Or, you know, leading.

Recently I’ve gotten myself into a situation where I have a space and the agency to throw my own parties, so that’s added immediacy to my Responsible Friendshipping goals. I get to say who comes to the party and what the theme is! I’m also interested, however, in the bigger picture. Am I helping my friends move in a healthy direction in their communities?

My main issue right now: Inclusion v. Exclusion. Practically speaking, this is a result of figuring out how to maximize needs fulfillment. For parties, that need is primarily “fun.” For friendshipping, that need is feeling like you’re not all alone in the universe (sad face). On the inclusion axis are motivations to demonstrate to community members why they are included and why their inclusion is guaranteed. On the exclusion axis are motivations to just be damn efficient and not waste time supporting members who are really just going to bollocks up everything for everyone (or just be really boring).

The failure I’m seeing in my friend group right now is buying into the idea that gatekeeping (exclusion) also successfully supports safety. I get why they’re doing it, and it took me a long time before I stopped thinking this was the best idea. Keep the baddies out, welcome the goodies in, right? Anecdotally, it’s actually true that this strategy didn’t work (a long time friend hurt a lot of people, not some stranger), and yet we kept using it.

The converse is not easy, either. Opposite of gatekeeping, you can promote safety with behavior policing. I mean, that’s how mainstream society does it — you know you can’t hurt people because the law will hurt you back, harder. Unfortunately, this strategy requires a lot of difficult things that we’re ideologically opposed to doing. We don’t want to dial-down a list of accepted behaviors, we don’t want to be tasked with enforcing these behaviors, we don’t want to create laws. Sure, if we could do those things, then we could know we are technically safe despite any member who might come or go. But we’re rebels! We’re lawless!

Behavior policing doesn’t have to be done with laws; it can be done with culture. Case-study: my dirtpunk/goth friends manage an open-door policy, for their parties at least, by cultivating a particular vibe. Their hard edge intimidates away the people who really probably shouldn’t roll with them, while reminding members there is a real threat for people who misbehave. (Misbehave is a relative term, as a fair amount of trainwrecking is tolerated. I mean, there’s a reason the sink is always stacked with dishes.) The benefit is that no one is sweating over if they got the invite (besides people who are intentionally banned) — they instead make the decision based on their own evaluation of whether or not they really belong. Of course, self-reliance is heavily required to survive in this kind of environment.

My core friends have been instead operating their friendship collective as a sort of “romantic relationship.” You choose the right person, you trust them to benefit you and you return the favor. And you do NOT need to invite the public into your private relationship space.

I’ve seen some good moves towards developing a healthy micro-culture in this context, but a lot of these efforts have been co-opted by the “relationship insecurities” in such an exclusive group. People are worried the friend-blob doesn’t find them sexy anymore, instead of knowing the friend-blob treats all people equally (doling out rewards and punishments for behaviors as needed).

There’s a loss of autonomy in this arrangement. I think we’re exceptionally inter-dependent. Decisions become bogged down by the requirement of having consensus with the rest of our relationship-organism. Some of this is exciting and good, but I think it stops recognizing the discrete individuals who make up our membership body (beyond their worthiness as members). Sometimes it feels like I’m in a cult, you know?

So, I think what I want to do is help my friends know there are more ways to curate the direction their friendships are headed than just maintaining a really sweet guest list. I want them to understand that they can grow a core group of friends and behaviors that will prepare us for multiple environments, and carry us through multiple adventures. Let’s let down the walls a little, and let people and new ideas pass through our kingdoms.